Talking about sexism online is like ringing a bell to warn people about the zombies: it calls the braindead horde down on you. A casual reader should never read comments, because becoming incandescent with rage is the least casual thing you can do, but part of my professional skillset is Proctologist of Justice. The comments section is like the end of 2001 except it’s full of anii instead of stars. And the giant baby isn’t the a cosmic vision of the future, it’s a whining manbaby of the present.

“That planet is full of women who wouldn’t have sex with me even though I was nice to them!”

Every time I write about sexism they reveal new levels of assholery. Each article provides enough comments to fuel five more. Forget the human centipede, I could build a human pyramid of endlessly spewing human waste.

You Should Be Nicer To Us Assholes!

I shouldn’t be so mean to the poor misogynists and racists. All they did was dismiss over half the human race! They write to let me know that if only I was sweeter to them, maybe they’d consider not screaming “slut” at anything daring to menstruate in their universe.

If there were any words that would fix those people, I wouldn’t be nice in an article, I’d hire a skywriter. I’d construct a laser cannon and engrave them on the Moon to upgrade the human race. 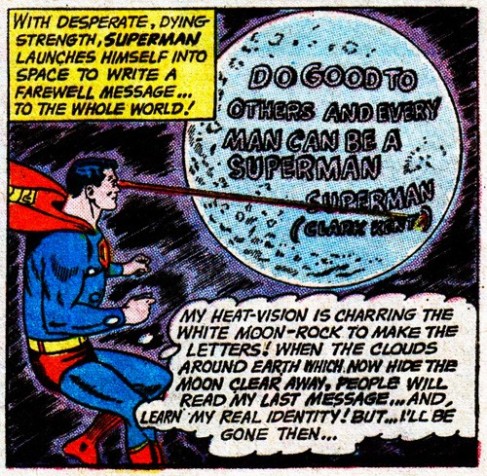 And Superman already tried it.

The message isn’t for those idiots. They consider listening to be an enemy trick, and you don’t cure a screaming madman by patiently waiting for them to listen to your polite requests. These articles are for the vast bulk of people who aren’t consciously assholes, they just never thought about these issues before. Which makes the psycho comments an essential part of the article, because the silent non-commenting majority see them and think “Damn, I don’t want to be like that.”

Black Lesbians Have It Easier

Tell straight white males that they have advantages, and some will whine about black lesbians. Which honestly says more about their internet search histories than their knowledge of society. Though you get the feeling the two are synonymous, and mainly based on sexual urges.

Quite apart from the insane claim that black lesbians have it easier, it reveals binary switches instead of an understanding of humanity. White or black. Male or female. Straight or gay. They’re ignoring a three-dimensional rainbow cube of identity by huddling in the corner terrified of everyone else.

The internet as parrot, using words it saw somewhere else without understanding them. A strawman is an imaginary opponent created specifically to be easy to be beat. Every single comment I use is real, recovered from comment sections by myself at great personal risk. It’s like panning for gold at the bottom of a sewage plant storm drain.

Watch out for the master stroke here, and I mean that in the fullest brain-hemorrhaging sense of the word. Because I talk about issues involving race, that means I noticed race AHA OMG UR A RACIST!

One guy accused me of racism against the endangered white race while using every possible letter-word for all the other races. I like to think that he was trying to cause such a logic error it reached out of the e-mail and crashed my laptop to prevent me from writing. Because thinking about how much dumber his stupidity really was would be a bit depressing.

“It’s not fair, he’s set things up so that if we disagree with him we look like assholes!” The most complimentary complaint ever, but I can’t take credit for basic human decency. If I suggest that women shouldn’t be treated as malfunctioning sex-dispensers, when someone disagrees it’s not my soph(isticated)istry  that makes them a dick. When I catch someone like that in the iron grip of logic, it’ll be because I constructed a giant nuclear robot and called it “logic”. As in “logic says you should stop being such an idiot”.

5 thoughts on “Internet Sexism Is A Fractal Asshole”