A recent Cracked article caught flak for pointing out sexism in BioShock Infinite, where the inhumanly powerful Elizabeth has the ability to pick any lock, retrieve weapons from thin air, tear open portals in space and time and rearrange reality itself, but still sits patiently in her tower prison until rescued by a man whose only power is “Ability to operate tools designed to be used by any human hand.” 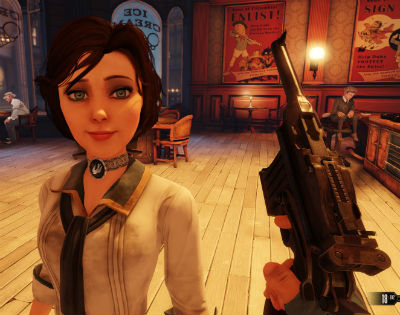 “Gosh, if only my frail feminine fingers could operate such beastly triggers!”

Hordes of commenters descended to scream about the Siphon, the ability-draining machine preventing her from fully using her powers. My god, they’re right! I bet Irrational Games were cursing that Siphon as they explored Columbia, gathering notes for the documentary that was BioShock Infinite.

“Damn!” they thought. “We almost had a powerful woman who didn’t exist only as self-propelling carrot for the dominant male to chase, but those dastardly villains developed technologies to cripple her! If only we could somehow imagine a fictional version of these indisputable historical records which didn’t relegate anything with ovaries to ‘objective and reward’. But no! Our ethics! As video game developers we have a duty to report the truth. If we altered these archaeological discoveries in any way, why, people would think this floating city of impossible technology was something we’d just made up!”

That’s why Grand Theft Auto’s budget is so big: it’s expensive to bribe your way into the Hidden City of Los Santos. And the Moon landings are nothing compared to the thousands of space invader armies NASA has conspired to hide from us, word smuggled out only by the Weekly World News and embedded video game historians.

I’m an published expert in video game breasts. I’ve also had fun with fictional females in The 5 Most Sexist Superhero Costumes, and the resulting 8 Dumbest Defenses Against Accusations Of Sexism.

8 thoughts on “The Big Balls of BioShock Saviours”