Humans buy lots of things to make them feel safe and distract them from the vast uncertainties of existence, which works out for cats, because they only need the box. 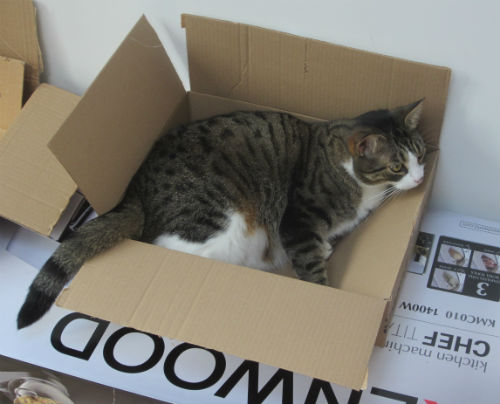 Unless you just bought a complete virtual reality system and a copy of “Heaven 2.0: God made it better”, you’re not as happy as Neutrino right now

Of course, this gave me an idea

“Why are you laughing? Why do I have a bad feeling?”

Cats love wedging themselves into the smallest space possible. If Goldilocks had been a cat the Three Bears story would have been a much better tale. She’d have stayed in baby bear’s bed, the cub would have found her and adopted her, and the Bear family wouldn’t have been enraged because for a cat breaking into someone’s house, trying all their food, and breaking their stuff is perfectly normal feline behaviour.

This box is just too small enough, and quite well-named.

The beautiful Dr X reports her internet friends say Neutrino looks like he’s fat. This’ is because he’s fat. But he doesn’t know that, so I’m rescaling reality to help him understand his ever-increasing size. With scissors, duct-tape, and sane-to-maniacal levels of cackling*, I shrank his favorite box a few inches once a week.

He’s already pushing the bounds or reality, but cats are established masters of adaptation. The instant they found out there was such a thing as evolution, they immediately cheated by getting the winners to feed them. A smaller box is no problem when your spine is a slinky spring.

Snug as a Tetris piece in a rug. Sorry, it’s hard to rhyme “Tetris”

If anything, this improved his comfort, creating a place in this confusing world where he fitted more perfectly than ever before. I immediately ruined it.

He knows something is wrong, and now he knows it’s my fault. I decide to cut his claws more often. But I cannot fear! I’m pushing the boundaries of cat-box interaction science here. If I can get it down to the Planck scale, we’ll be able to solve Schrodinger’s problems for real!

I may have pushed things too far

The exact moment Neutrino decides I can go to hell

But I have patience. Contrary to what this article might suggest, I don’t just sit around playing with the cats all day, so I got on with work while he mourned the ruin of his lost happiness.

I never understand the struggle of scientific ethics before this moment.

But mere days of glaring guilt-trip later, Neutrino lived up to his name and appeared somewhere a massive item couldn’t possibly have penetrated! 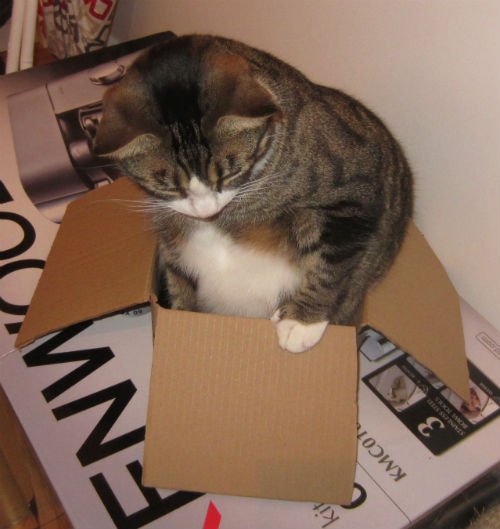 “Does this box make my giant ass look big?” 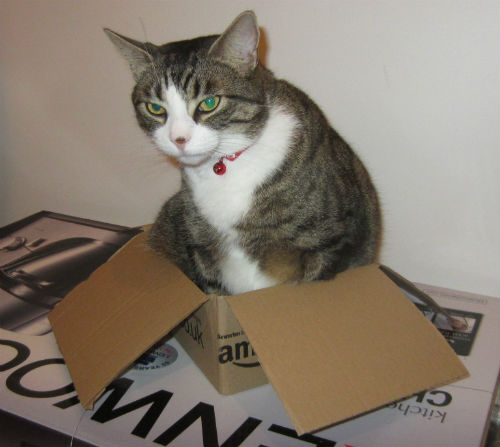 It looks like I grew a cactus out of pure hatred. A cat-cuss. I’m going to buy a mace can full of catnip.

Luckily my life was saved by the very laws of physics I’d been taunting. Far before I could cross the TARDIS threshold with nothing but catfat and cardboard, Neutrino’s “eat everything” strategy triumphed, just as his instincts had always told him it would.

Not so much a polygon as a boxisgone

“You thought you could win this power struggle? You have to wear pants!”

There was never any doubt who would triumph here. Cats can escape from the world and bathe in their own thoughts and preferences inside a mere cardboard box. But like you reading right now, humans need computer boxes for that.

For more felinery, you can read Catmopolitan and Scientific Americat in my piece on Cat Behaviour over on Cracked.