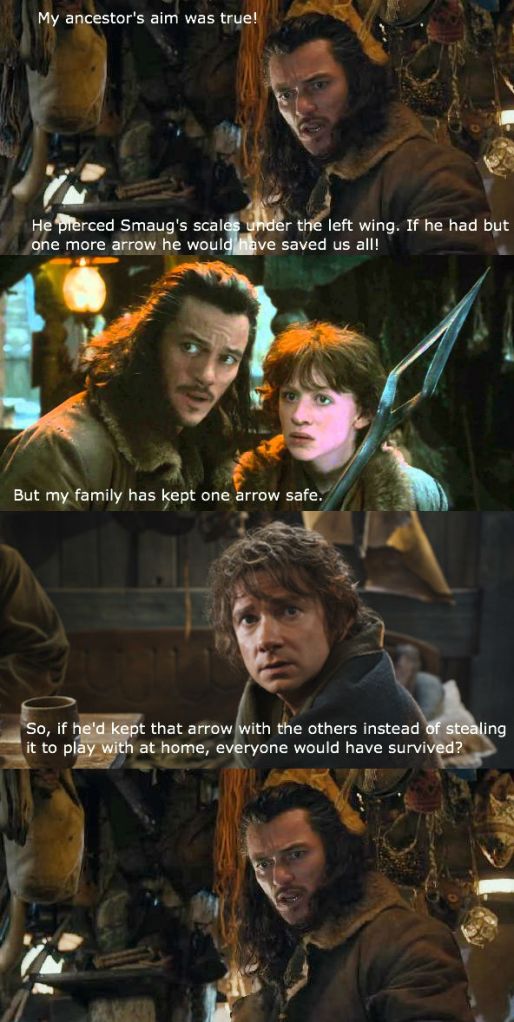 “And if the scale has already been pierced, doesn’t that mean that anything could kill Smaug now? Like regular arrows of which there are thousands in the city, not counting the infinite number being carried by Legolas and Tauriel? I don’t want to labor the point, but it’s just that your family is apparently really bad at knowing how to use a point.”

The Hobbit’s good fun, it’s just a pity they were bribed into drawing and thirding the poor thing for extra money. Even in the most beautiful scenes you can feel where the plot’s sinews tear and pop a single fun romp is stretched out over a trilogy. And where they kept the unpleasant noises to try and lend a fun kid’s story some epicity. And no, the word “epicity” doesn’t work. That’s why I used it for that attempt.

It’s time dilation as caused by proximity to vast quantities of money, the spacetime continuum stretched by sales of tickets and DVDs. Behold how the property is endlessly extended:

More movie magic with Patch Notes for C3PO.1, and Why Cyclops Should Be The Best Boyfriend Of All Time.