“Maybe 40 years ago it was important to prevent pillocks from ruining everything, but we’re here now, and we’re obviously against that” said the pillock.

“I asked my children and they told me they don’t think I’m a pillock. And if you can’t trust a man who uses his own children as political proof, who can you? What’s that? No, I can’t claim ‘I have a friend‘ who isn’t a pillock. I don’t seem to have any of those since I started talking in public.”

“I think the situation that we now have, where being a pillock in public can lead to negative consequences, is one I’m not used to” said the pillock. “I mean, I’m white and rich. I shouldn’t experience the slightest inconvenience no matter how many other people I hurt. That’s the attitude the Empire was founded on. And the days of Empire are the fondest fantasy of pillocks like me.”

Fight back against the pillocks with the UK1P, The United Kingdom One Person party!

Chinese streets are plastered with adverts for gendered hospitals. Men and women seem to be kept strictly separate, but this isn’t a puritan attempt to prevent sexual impropriety. It’s a medical industry based on the exact opposite.

The women’s hospitals advert is a girl in a white tutu dancing past the closed petals of a lush young rose. It couldn’t be clearer imagery without becoming an explicit illustration. In fact, it’s the maximally innocent illustration of a vagina, as anything more detailed would actually include a vagina, and therefore be less innocent because it’s prepared to show you its vagina. And the whole point of this surgery is pretending that they’d never do any such thing. It’s the awful practice of surgical hymen restoration, intended impress the sort of asshole who demands that you’ve never had sex before, but also demands that you have sex with him immediately.

The men’s hospitals invert things in another way. They’re not about pretending you haven’t done things you have, but about continuing to do things you can’t. “Hi!” says a man in a white coat, holding a vial, or a herb, or anything doctory apart from scary scalpels. “I’m Dr Smartman. I fix cocks.” Because there are men out there without working cocks, and you can bet your bottom dollar we need specialist facilities to get those flesh-pistons firing again. Men can pound the pork until it stops working, then get it surgically reinflated, but woman had better not even know what sex feels like until he gets there to do it.

All the finest in capitalist surgery (and what more reassuring motive could you have for someone sticking a knife into you than “They want your money?”), all so that that men can keep having sex with women, and women can keep pretending they didn’t.

This isn’t a uniquely Chinese problem. This is true in almost every country in the world, in almost every industry you care to mention. Everything from shampoo to social legislation speaks of the same ridiculous double standard. True, that virginerina poster combined almost enough images of purity in one place to crumple spacetime itself into an impenetrable hymen, preventing the progression of the human race, but the same attitude is everywhere else. And needs to be left behind.

Pope Francis strode onto the balcony overlooking St Peter’s square wearing his finest magical-celibate robes to exhort the faithful. “BREED FOR THE BREED GOD! SOULS FOR THE SOUL THRONE!”

“God needs babies!” cried the Holy Father, who would get in serious trouble if he was ever actually a father. “It’s selfish not to have children! We didn’t quite exterminate all competing religions in the military phase of this Religion Time Strategy game, so now we need more workers in the economy phase. I mean, don’t get us wrong, we tried. We wiped out thousands of innocent paganisms and crusaded hard to slaughter the rest, but now it’s all about the numbers.”

“We need you to increase production” Francis continued, raising arms draped in brocaded robe to make a vigorous finger-through-ok gesture. “Wink wink” he added, out loud.

The International Hypocrisy Court remains unable to prosecute the Pope for these statements, as paintings of paintings of St Francis in the incalculable wealth-vault of the Vatican continue to overload their hypocrisy detectors.

“We haven’t exactly been subtle about this!” continued Francis. “Sexual health education, bodily autonomy, women’s rights, we’ve opposed anything and everything which might even slightly reduce the number of even accidental births, no matter the cost. But it’s not enough! Other religions still exist! Forget increasing our spiritual market share and ludicrous income, if people realize how there seem to be several dozen simultaneous one true gods, they might reach some absolutely basic but extremely inconvenient conclusions.”

He raised his arms to the sky.

“The Breed God cares not from whom the seed flows, only that it flows! Lay down more overcrowded faithful at His feet! Ask us how we’re sure He’s a He to see how modern our attitudes are! Souls for the soul throne! Because anyone who could look at the modern world and think ‘This needs a lot more people’ definitely isn’t going with ancient instructions instead of evidence.”

“Previous gods of suffering and bloodshed favored war. That’s amateur hour. Our god understands that the best way to maximize suffering and hardship is to pump out as many people as possible. Overload the resources! Collapse the system! The more people left desperate for succor, the better for us! We’ll get people back into church even if it’s the only standing room left for people who trying to avoid the Soylent trucks!”

Pope Francis then answered some questions from the crowd.

“No, I don’t think it’s hypocritical to guilt-trip people into having more children while talking about how Christian it is to protect the environment.”

“Yes, I still think you should hit kids. Jesus, stop going on about that. Have ’em, hit ’em, do what you like, just keep us on top of the census figures.”

“Of course people should take child-rearing advice from an organization which has to explain it’s not a euphemism when they say they’re in favor of having kids.”

Dogs and cats. Two glorious examples of how much people want to share their love, and some people still turn it into a pitched battle. That’s the entire hope and tragedy of our species right there. Some of the more rabid of the dog brigade boast that they don’t need to keep shit-boxes in their homes. But when a dog owner brags about not having to clean up after their pet, you know you’re not the asshole in this situation.

Because the asshole in any pet situation is still a cat. Even if they’re not involved. They’re that good at it. And Neutrino is unveiling the full power of his biology in a quest for domination. 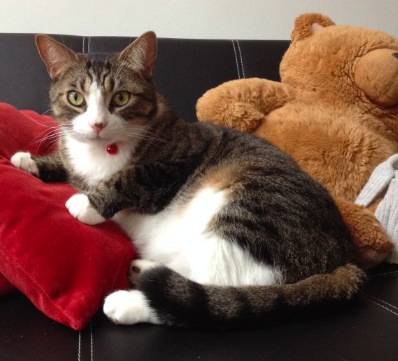 What happens when Blofeld and his cat have a telepod accident

Or rather he’s ceasing to veil it, leaving his litter tray deposits uncovered as a feline power play. Proof that this is his land, his home, and that he fears no other animal in the area. He stinks the place up and I must obediently scoop it away. But I don’t buy that idea of inferiority. Because you know, if someone came into my bathroom every day to steal my poop, and there was nothing I could do to stop it? I wouldn’t feel like I was winning that interaction. Every time I do my doody-duty he stares like I’m too crazy to understand or confront.

Then there’s the pee. When Striker pees outside the litter box it’s impossible to punish him, because he looks as confused by what’s happening as anyone else. He gives the impression that the few neurons he has to play with are just holding on to the front of this “cat” thing as it’s driven around by a self-cranking tail. Not like Neutrion, who knows exactly what pee is and how to use it. He never goes outside the box by accident. It’s only ever when we’ve returned from holiday. To show his displeasure he’ll leap onto an unpacking suitcase and piss right through all our clothes, maintaining eye contact all the way. He’ll stay arching and staring even as you dive at him, taking the hit just to teach us a lesson.

But their smelly stuff does describe another interesting animal hierarchy. Our local cattery recommended Small Holder Range chicken pellets as cat litter. Big bulky bags of odor-absorbent, easily-scooped litter box material for a fraction of the cost of stuff which actually says that on the bag. So the chicken’s best food is the cat’s best toilet roll. You can’t make your position above something else more clear without peeing on them directly.