Gettem city was beautiful at night. Unless you were upside down and seeing it from above. Then it was terrifying, and gently sprinkled with urine.

“Oh my god don’t drop me!” screamed the inverted man, flailing at a ledge just out of reach.

The fist clenching his ankle tightened. He would have sworn he wouldn’t have thought that was a bad thing before the pain hit.

“YOU FUNNEL TEXCORP ARMS TO THE BLACK MARKET!”

The shadowy figure watched the speck plummet into the empty ornamental pond below. What kind of idiot argues from that position? Apart from a short-lived one.

Wuss Brayne scandalized Gettem society by arriving at the Charity Balls for Testicular Cancer with an actress and a fashion model on each arm, making a total of four. It was the perfect cover story: they’d be well paid to swear that he’d spent the entire night with them. Because he was absolutely going to spend the entire night with them, going to all sorts of places and using all kinds of fancy equipment. Screw crime, there were better options. Being rich was awesome! They’d be paid by selling steamy tell-all features in gossip magazines, or as Wuss thought of it, “free advertising.”

He didn’t even notice the armed thugs bursting into the room, getting as far as demanding “All your jewelr-” before dropping, cut down by expert Brayne non-lethal taze-snipers. It turns out that homeless thugs don’t outperform expertly trained and equipped troops. Not even when they’re led by an unstable madman!

Master keys get you anywhere, but announce that a master was in the building. Far better to use a temp janitor’s card. Security cameras flickered and rewound as he shadowed past to the executive boardroom. Professional adjustments to the media console. A cooling system fails, another overheats, the lamp explodes, and nobody wastes Brayne Industries time with another PowerPoint ever again.

“I’m sick of commissioning cordons! I’m just a giant police-tape dispenser to you, keeping my cops out until you’ve finished your work. But you only reveal corruption in competing corporations. You only save Brayne Industries facilities. And I’m a goddamn detective! I know who you are, and from now on you’ll help on my terms or the press learns everything.”

“Oh no!” cried The-Man, the combination of growly-bass-rumble and fake-high-pitched combining to make him sound like a sarcastically buried coal miner.

“If people suspect that an unstoppable vigilante protects Brayne Industries while crippling the competition, whatever will happen to their stock? If workers knew that corruption or laxity was punished by beatings instead of performance reviews, what would happen to their work ethic? If these facts were kept in the public eye for years by an endless court case defended by my army of lawyers? Whatever you do, please don’t spread the word from the highest levels of law enforcement. And receive a large donation towards the police retirement fund. By this time tomorrow.”

With that, The-Man vaulted out of the window into the back of The-Car, an anonymous black business sedan loaded with armor-plating, alcohol, and an autodrive system. The sunroof whispered shut as he reclined on the luxury leather seats, pouring a bourbon as The-Car sped for home. He rested his feet on the autodrive system, wondering what kind of moron would spend a million dollars on a car and still have to drive the thing.

From a few years ago, was working on a Batpiece which ended up going in a different direction. 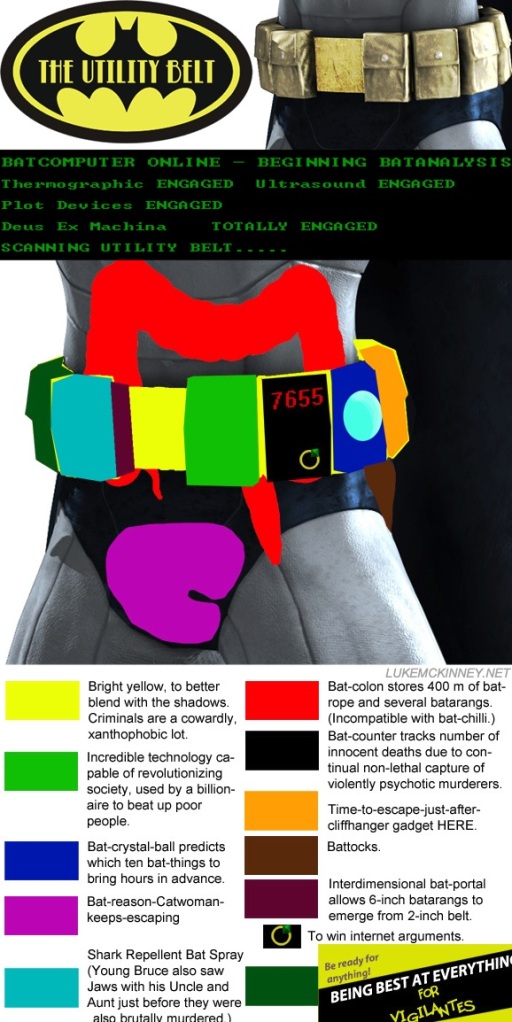 Of course the real hero is me for resisting the urge to rework the whole thing. Though I do like the Battocks.

“What if the Joker became Batman?” Something you’d hear after three seconds of a Batman brainstorming session, and only because it takes three seconds to say. It’s a simple idea which would require a genius to pull off. The team behind “I, Joker” knew that, and knew they didn’t qualify, and unfortunately knowing two things simultaneously overloaded their simple brains and everything after that was gibberubbish. Especially the comic. 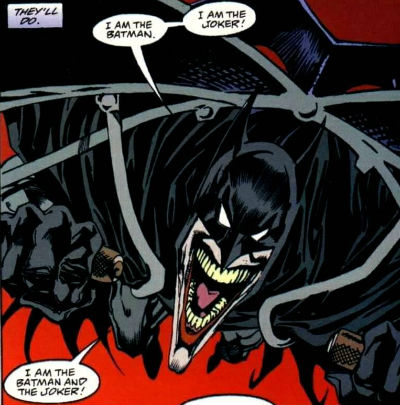 This is actually a high point of the issue’s writing.

They hacked away at the idea until even Zsasz wouldn’t recognise it, babbling “Actually it’s not the Joker, it’s a random nobody who’s been surgically altered to look like the Joker, and not the Batman, but a distant insane relative in the future, and where are you going?” Unfortunately, their audience was going to sell the idea to DC. The resulting trainwreck had less to do with Batman than Prince Namor, but still happened. 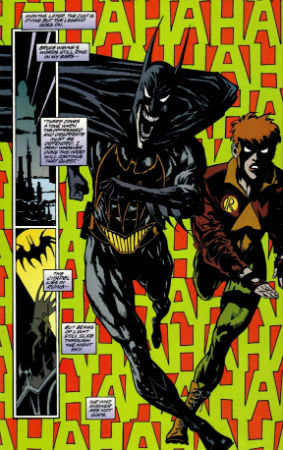 Yes, what the utility belt really needed was grinning crotch-teeth.

In the far future Gotham is a cross between the Church of Batman and the Running Man, and this comic will still not have been forgiven for creating and then failing to live up to such an awesome idea. The Church of Batman uses abduction, involuntary surgery and brainwashing to turn random citizens into crazy villains who terrorize the city. (The crazy thing is where you realise that they’re using evil techniques, but having the exact same effect as the original Batman).

Anyone managing to kill a villain gets a chance at murdering The Bruce, the divine figure of this chiropterological cult, whose main Bat-aspects seem to be killing people and shouting Batman’s real name as often as possible. Honestly, I don’t think he’s read even one issue of the scriptures of Batman. He’s just in it for the evil cape. 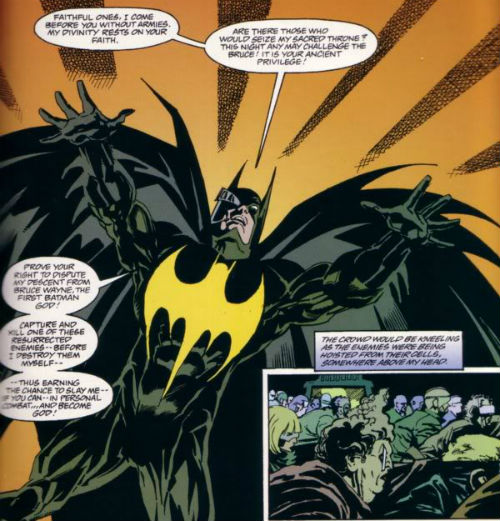 Though he is quite good at dispatching all the optimistic wannaBats. 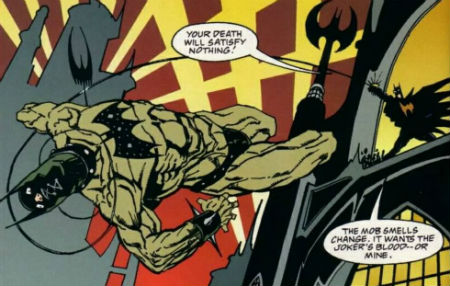 No, that’s not a fleshtone suit. Yes, that is how you show Batman could be even more bondagey.

The latest Joker-a-like manages to hold on to his original brain. Which means that this fake Joker isn’t even a good a fake as this comic could have aimed for. He’s just a random mook with a facelift. True, a Joker facelift means hoisting the corners of your grin into low Earth orbit, but the fact remains that instead of a reincarnated clown prince of crime, we’re following the adventures of an involuntary cosplayer.

We end up with a fancily dressed cult leader fighting a victim of botched plastic surgery. There are more authentic Bat-struggles in the queue for the toilet at cosplay conventions. (Protip: of all the things you include in your utility belt, the ability to quickly remove it to urinate in a cramped space is the most important.) The-guy-who-heard-of-Joker-once wins, swears to defend the city, and everyone pretends the story never happened.

Witness even worse Batmen with The Worst Alternate Universe Batmen Ever, and celebrate the release of Arkham Origins by laughing at The Worst Batman Video Games Ever.

Revel in the rage triggered by 6 Objective Reasons Iron Man Is Better Than Batman. Or see how I’d solve Gotham with An Infinity Of Alternate Batmen.

In the parallel universe of Earth-53, the Wayne family take a shortcut through Crime Alley to return to their car after a screening of Zorro. A mugger tries to steal Martha’s pearl necklace and ends up shooting both parents, traumatizing their son, Bruce. He swears this will never happen again, dedicating his life and his family’s billions to improving up the Gotham police force.

Earth-232: The Wayne Foundation revolutionizes the world by perfecting bio-mimetic nanotech materials, but goes bankrupt after flooding the market with synthetic pearls. Pearls become so common they’re used as a cheap building material. Crime Alley is forever cobblestoned and lustrous.

Earth-441: Demented filmmaker Bruce Wayne purchases and destroys all extant copies of every version of Zorro. He spends his fortune constantly re-filming and re-releasing reboots of the pulp swordsman, as praised for their repeated mastery of revolutionary new cinema techniques as they are criticized for always ruining the third act by having Zorro time-travel to the present to stab a gun-wielding mugger.

Earth-722: A traumatized Bruce Wayne realizes that there can be no street crime without streets. He excavates and floods all roadways to create a network of canals, renaming Gotham as “New Venice”. Most desperate and starving criminals cannot afford rebreathers, and the remaining thugs becoming much easier to spot on their motorized gondolas. These are swiftly defeated by the city’s new champion of justice, Aquaman.

Earth-2289: Master psychologist Bruce Wayne spots the key flaw in the Gotham criminal population. He becomes a Broadway producer, hiring every thug in the city to act as costumed chorus lines for the greatest musical stage show ever made. Without minions the Gotham criminal scene collapses. The show goes on tour, hiring all those drawn to strict-yet-ridiculous direction and uniformed clothing. Spin-off shows start in Metropolis and Central City, spreading to every country of the world. Every criminal organization loses its membership. The Joker dies when he can’t resist the urge to honk the horn while assembling his own dynamite-laced bumper cars.

Earth-15743: Bruce Wayne realizes that, holy shit, his parents were shot. He convinces Superman to take, like, five minutes to fly around the city destroying all illegal guns. Wayne Industries funds a global campaign to repeal the Second Amendment. The Joker becomes spokesman for the NRA. This is considered a step towards moderation and sanity by the organization, since it means replacing Wayne LaPierre.