The Sagrada Familia is one of the most amazing buildings in the world. You could call it a church in the same way you could call a Cray supercomputer an odd-shaped coffee-table: using it that way misses the point, but that doesn’t detract from the sheer genius within. It became a world heritage site before it was even finished. It’s one of the most famous buildings in the world and it’s still not finished. 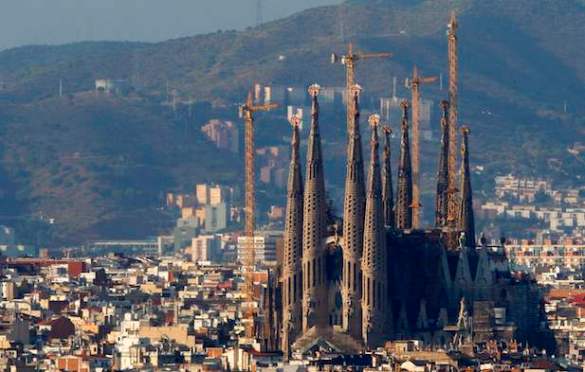 They have smartly-dressed staff whose main job is asking people not to stand stunned on the main entrance stairs, and they deal with almost exactly as many people as the ticket counter.

Entering, your first thought is that humanity has reached heaven by building a space station. It’s a soaring forest of skill in stone.

Notre Dame is an immensity constructed to crush the human spirit in awe, squeezing a flow of supplicants for the wine of surrendered devotion. St Paul’s cathedral is a pre-industrial black hole of money, a singularity of sheer wealth deforming the entire world it dragged around itself. Sagrada Familia is the first church I’ve entered where I felt like we were the point. This is a church which celebrates the humans who made it possible. The altar and torture-figure dropped into the middle barely register on the scale of the structural beauty. Large pictures of popes cry for attention, but their pleas are lost amid the monument. If this building glorifies one man it’s Antoni Gaudi. Who may in fact have been an Eldar.

The building enhances and endorses us, exemplifying our greatest achievements and inviting us to realize just how high we can reach. It doesn’t even have pews, just an array of folding seats, as if the religious ceremonies were just one temporary function of this incredible achievement. I know that’s only because the pews will be the last thing installed when there’s no more heavy lifting to be done. But I also know it’s still a good metaphor for human intelligence and progress.

I love walking past this place

Imagine the lovely lords and ladies clanking onto the stage, exciting the peasantry by pulling off vambraces, greaves, starting with a sultry kick to send a solid steel sabatons crunching the front row. That would be a real Gentlemen’s club, because you get a much more respectful audience when hurling your clothes can cause serious injury. I’ll never go inside. This is the one situation where naked sexiness would be an active disappointment.

The way strip clubs are always built to be utterly impenetrable to light only adds to the feeling of a carnal castle. It’s an extreme case of the shared function of clothes and buildings: all of the protection from strangers and the elements has been offloaded onto the building, freeing those inside from needing clothes at all.

Bloor also has the greatest thrift-shop name ever:

Alas, it’s one of the crappy universes killed off by the DC New 52, a universe of deeply disappointing shirts. They haven’t so much ransacked the universe as waited by its trash until they were sure even the rodents didn’t want anything that was left. But it’s still a hell of a name.

London, Ontario, is a nice little down stuck with the most disappointing suffix in the English atlas. Announcing a trip to London, Ontario, means saying that you’re going to one of the most interesting and historical cities in the world,  not really. It’s like saying that your job lets you live like a king, size meal, in that you stay in a cramped overheated box while your fate is decided by people who don’t care for the minimum possible prices.

My errands took me to King’s College. I got out of the taxi, saw a tortured emaciated man hanging from the side of the building, swore “Jesus Christ!” and realized I was right.

There are a couple ways you can go with the famous Christian cross. You can take the symbolic route, reducing it to two crossed lines, a clean and abstract shape which merely represents one of the most brutal methods of execution ever created. Or you can go with the full crucifixion, building a cross and then suspending a detailed carving of a dying figure in full public view. Here they’ve gone for the previously unknown third route: getting rid of any parts which aren’t experiencing excruciating death.

They’re actually counting on the fact that anyone who sees a floating near-naked avatar of pain will associate it with their religion.

Without the cross it’s not faith, it’s a genderbent Japanese horror movie. Complete with PG nipple-bandages.

The theme is toned down in the classrooms, where bright, professional lecture halls are only fitted with a standard wooden voudou-style fetishes of the publicly killed on the wall. Anyone teaching there is advised to arrive early so that they can hide the creepy capital punishment doll behind a lectern before any students see it.