Plasma physics is steampunk for this century. An old fashion has come back  again and this time it’s science as well as style, a fusion fashion. We are genuinely building the future with the same aesthetic that drove locomotives across the continents. Clanking constructions of metal controlled by the most delicate intricacies of intellect, titanic forces tamed by humanity to tame the globe for us in turn. And this time the globe is no mere Earth but Sol itself. The technology is even based on the transformative power of a newly-harnessed state of matter. Instead of using fire to boil water, our tanks are filled with something hotter than the flame itself. 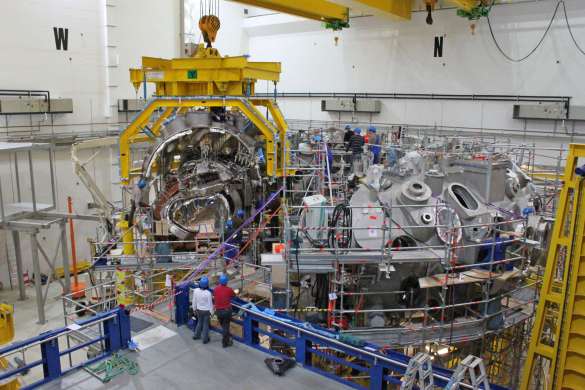 Huge sections of the Wendelstein 7-X stellarator being lowered into place. Something so massive hasn’t been created by such intelligence since the Incredible Hulk, and this will be more powerful.

Steampunk is tremendous fun, but we don’t no longer need to play make-believe in the mud of the past. Plasmapunk offers the same glories without the downsides. We don’t have to overlook some seriously suspect aspects of the period, or ignore incredible advances in the technology we all love. Vacuum tubes might look cool, but transistors are man-made miracles, and this way we get to connect our most advanced computers to the winding coils and glassed chambers of sparks and plasma.

A fusion reactor built by the clearly brilliant William Jack

The best part about plasmapunk is that it’s real. Every socket and shining rivet has to be exactly where it is, every conduit and inspection hatch designed to do something, and that incarnated intelligence shines through every aspect of the structure even before you ignite the starstuff inside.

A plasma chamber with all the gleaming bolts and piping a steampunk could ever need. (University of Iowa)

In plasmapunk you don’t have anyone gluing a bunch of gears to leather boots and claiming it looks cool, when that’s more agonizing to the mechanically-minded than building a machine to scrape the same brass cog-teeth down a blackboard because at least then they’d be used for doing something. Punk has never meant copying what went before, or trying to just look the part. It means forging a new identity against the old system. And plasma power sources are going to break the world as we know it right open. Fusion energy doesn’t just mean cheaper electricity in the same way the steam engine didn’t just mean saving on horse feed.

We have countless subcultures dedicated to the past, re-enacting the old, and rebuilding the ancient using improved parts and digital cameras and the ability to stop for lager and chocolate biscuits instead of being stabbed to death in a fields. Pop-cultural hordes based on cartoons, comic books, and something called a Bieber. Now imagine an identity forged from the future being built right now. Because science is already there.

The Wendelstein 7-X stellarator is the coolest name ever made. And I mean we made that thing for real. It’s proof that the most amazing terms have always been in the science, not the –fiction. It’s so gloriously impressive I don’t need to worry about whether my firstborn will be a boy or a girl: either way they’re set, and are going to have the most impressive business cards in history. 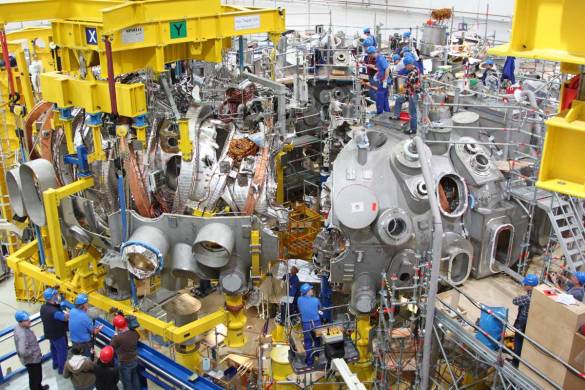 The Sun is a gravity-powered fusion reactor, the power plant for all life on Earth. We don’t have the three hundred thousand Earths we’d need to build another Sun, but here’s the thing: gravity is the weakest force in the universe. Electromagnetism is a hundred thousand million billion quintillion times stronger. Which means we can start our own reactions without gaining nearly as much weight.

The key to electromagnetic fusion is the toroid (aka the donut). We zap the gas up to fusion temperatures with electric currents and electromagnetic radiation and hold it in place with magnetic fields instead of a gravitational one. The twisting Wendelstein, which is even more powerful than the wrestling move it sounds like, comes from the need to confine all the particles equally. In a regular donut shape gas at the inner edge feels feel stronger forces than gas on the outer edge, leading to leakage, so the torus twists to pass the circulating plasma back and forth between the inner and outer edges, averaging out the forces.

Above: Theory
Below: Practice

The result looks like someone started building a Mobius strip and couldn’t stop until they’d included everything humanity had ever learned about science. Which is almost exactly the case. 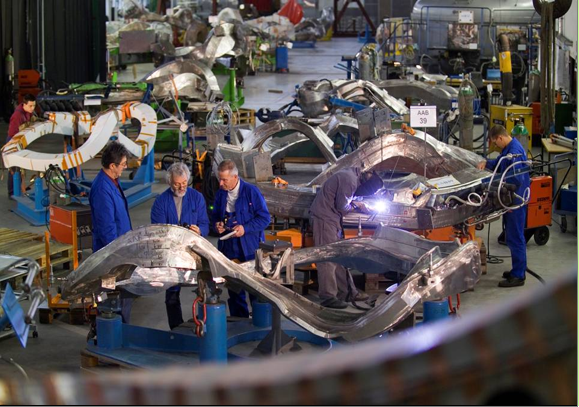 An array of master-crafted metal mobiii

The result is a masterpiece of modern science, combining our most advanced theories with our most impressive technologies. Every curve calculated and crafted, every addition the result of lifetimes of work. It’s an installation in every sense of the word: something put together by humans, a location designed to perform a task, and an artwork intended to change life for everyone exposed to its effects.

You also end up with people building themselves into techno-Dali.

It’s beautiful, and I realized: plasma physics is steampunk for this century. Continued in “Plasmapunk Is Steampunk For Real“.

An exciting day over on Cracked, where I’m cutting loose the limiters and seeing just how much nerdy glory the internet really loves with 5 Mind-Blowing Mathematical Formulae. No claims of sexual solutions, no promises of insight into the perfect cup of coffee or bacon or coffeebacon, flat out mathematical beauty and an experiment in whether I’ll get to write more of these.

The idea that the universe is understandable is incredible. That our brains’ processing power and the structure of reality should overlap in a strings of symbols is the most amazing aspect of existence. Life itself is a sure thing compared to the coincidence of being able to deduce the rules behind your reality. Which makes it all the more tragic that so many don’t. People promulgate the idea of science and mathematics being amazing but impossible, sorcerous incantations mastered only by an elite few. This doesn’t give it an aura of power. It reduces science to the level of any other cult of authority, claiming ascendance by dint of being terrifying.

But we don’t need to be terrified of anything. We used to worship the sky because it shouted at us and set things on fire; now we can steer lightning with lasers, and don’t even have to, because a stick of copper can do the same job. We used to sacrifice living things to the gods of the harvest, because we were frightened of dying ourselves, and now we fertilise so many plants we get to choose which continent’s cuisine we want to have each night. We don’t need to be scared of anything that we can understand. And we can understand everything up to and including the edge of the universe itself. (We understand it so well that I get to use the borders of creation as a gag at the start of that article.)

We literally have the universe’s number(s). But because people think it’s boring, or hard, science is seen as just one more opinion in an argument, as opposed to the process which renders all argument obsolete, replacing it with results.

Which is very grand way to talk around an article where I make a 543 digit long dick joke. Which would be both hard and scary, too, but at least that’s the sort of thing people use the internet to look up already.

(Source: Top Event by LHC, Brain by Obscenity of sxc)

Science scares some people into thinking they have no control over what they’re thinking. Which is a terrible spiral to be caught in. And not much of a reward for thinking so much about science in the first place. If physical laws determine what will happen for any collection of particles, and your brain is a collection of particles, everything you do is already determined. Which turns consciousness will into a sadistic joke, because we were pre-determined to develop free will and then find out we hadn’t.

The first escape from this classical trap is quantum chaos, which sounds like a great way to escape from anything. Possibly by confusing it. Quantum mechanics means we can’t precisely measure everything about anything. We have to choose between knowing something’s position or momentum, its energy or how long it has that energy. This uncertainty introduces error into our measurements, which chaos theory amplifies until it’s so stupidly impossible to predict what a human brain will do that people ask Cosmopolitan columnists for answers instead of the laws of physics.

If they experimentally tested their theories, every issue would come with three emergency room visits and a divorce.

The problem in that solution is that it isn’t one. Quantum chaos only says that we can’t predict what happens next, not that it isn’t predetermined. It’s a relief to know that someone can’t fire up a You-mo-tron 3000 and spend the rest of your life annoying you by saying things just before you do, but it doesn’t salvage free will from physics.

Our second stage is to go full quantum. Quantum mechanics shows that observing things changes the result. Not just for bullied cats, but even for bashful electrons which behave differently when they’re under examination. This should turn the brain into an observation engine, an existential-bootstrap turning its ability to observe into the ability to choose what to observe.

This doesn’t save free will, but makes something more interesting. “Observation changes the result” is the large text simplification of quantum mechanics. When we say observation changes the result, we mean that it forces a photon (for example) to choose between linear or circular polarization. Once we filter it in linear we force it to be horizontal or vertical, but we don’t get to choose which. Likewise, filtering it for circular forces the photon to choose between left- or right-circular, but all the observational machinery in the universe can’t bully it into being sinister.

How you deal with the free will conundrum tells you a lot about yourself. Whether you had a choice in that or not. Ignorance seems to make a lot of people happy, while others try to absolve themselves of their selves.I already revealed my solution by mentioning Ghostbusters.

Using physics to have fun and kick metaphysical ass.

My solution? I believe in free will, because either I have free will or I was determined to think I had free will, and either way it’s by far the funner option, letting Occam’s razor shaves away the stubble of insecurity.

Might I change my mind? Of course. That’s the point of having one.