Humanity’s greatest hope soared through space, apologized for the inconvenience, and self-destructed.
The President watched the replay of a trillion dollars of rocket science, space laser, quantum-interference baffling tech and the cream of the brand-new Space Force apologetically immolating itself. She sighed.
“Options?”
Her military advisor shifted awkwardly. She pretended not to notice that he’d been crying.
“Zero. This confirms that the machines have totally hacked the human semantic centers. If we can so much as see them, they can convince us to switch sides. Those pilots were as close to brainwashed as you can get without opening the skull, and they were still convinced inside a minute. Our only hope would be a human brain utterly immune to new input. But that’s the opposite of what a human brain is for! We’d need some-one incapable of following even the most obvious logic, rejecting even the clearest data, one who could start at one plus one and end up with their favourite ice cream flavor and then react violently against anything which tried to convince them otherwise. ”
The President closed her eyes. She’d hoped it would never come to this.
“Go to a Steven Universe forum. Find someone who’s written four thousand words about the gems being straight.” 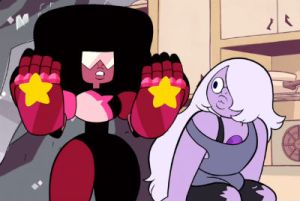 About as straight as silly string in a hurricane

If there’s anything more tragic than stitch-fiction, rewriting properties to remove homosexual aspects, I’ve never heard it. It combines all the fun of writing, watching, and imagining sex into something less inclusive, and with less sex. That’s not just the opposite of slashfic, that’s the opposite of quite a lot of being alive.

Modern slashfiction fun started with Spock/Kirk. It provides many of the relationships mass media lacks because mass media doesn’t understand sex. Because if you don’t include that people can be homo or bi or asexual, then you don’t understand sex, in the way someone who doesn’t recognise sixes and eights can’t be good at math.

Inserting a homosexual relationship (or whatever other items you’d enjoy) doesn’t damage the existing story. It works for the fans by adding elements on top of (and interacting with) the official material. But trying to canonically straighten obviously queer characters means dissecting their every appearance, ripping out their heart, and stitching the bits back together in a different shape. And any science-fiction will tell you that never ends well. Queer characters don’t happen by accident, we’re still struggling out of a climate where they have to be deliberately constructed and carefully escorted past layers of lazy filtering which think it’s easier to be monotonously biased than risk writing more real people.

If you want more relationships of any orientation, write them in! But if you want a show without queer characters just change the channel. I guarantee you’ll find plenty.